Background: Lampreys are an ancient, pre-historic type of fish. They are unique as they have a suckered mouth, rather than jaws, they are quite unlike any other fish species in Britain or Ireland.

Lampreys are fairly widespread in the UK. However, during this century, the habitats they depend on have suffered from a range of impacts, including pollution, land use change and river engineering. Pollution can have a direct toxic effect, silt from surrounding land can smother important breeding habitats, and river engineering can remove important nursery areas. Artificial weirs and dams can block migration to feeding and breeding habitats.

Information about the abundance and distribution of lampreys within the Cardigan Bay SAC is very limited. However, fishermen using the Teifi and Aeron rivers report that lamprey have been caught for generations and recent records show the occurrence of both species in the Teifi.

All lamprey species spawn in fresh water in spring/early summer (depending on species).This is followed by a larval phase (ammocoetes phase) spent in suitable silt beds in streams and rivers. After transforming into the adult the river and sea lamprey feed parasitically on a variety of fish. In the juvenile stages lampreys constitute an important source of food for many bird and fish. The mean density of lampreys present within the Teifi river, in areas of optimal and sub-optimal habitat, has been assessed as being below that considered as favourable by JNCC, the Joint Nature Conservation Committee. 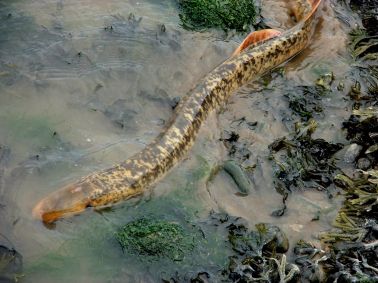 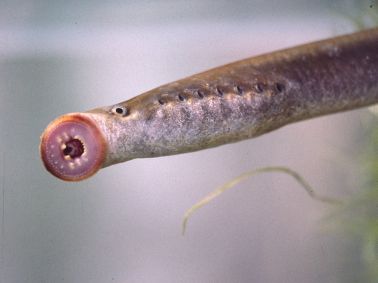 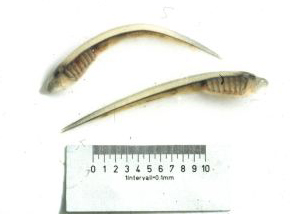 How can you help?

Occasionally lampreys maybe caught when fishing for coursefish or salmon. If you do catch one, please return it as soon as possible with the minimum of handling. Lamprey are also commonly seen on their spawning beds – please let us know if you see them by informing the Cardigan Bay Marine Protected Area Officer by emailing melanie.heath2@ceredigion.gov.uk

Life cycle: Young lampreys (ammocoetes) live buried in the silty beds of freshwater river margins, where the water is still. They are blind, have no oral disc and feed on minute particles in the water. After several years of larval growth, they metamorphose into adult lampreys and migrate into nursery areas. Adult river and sea lampreys.

Notes on identification: Lampreys are amongst the most primitive of all vertebrate animals. They have a skeleton made of cartilage instead of bone and a distinctive suckered mouth instead of jaws. Their bodies are shaped like eels but they have no scales. The adults have two fins on their backs, which are often continuous with the long tail fin. The gill pores – one row on each side of the head – are not covered.

Adult River Lamprey:
length: Length at spawning always >17cm but <50cm
colour: back and sides of uniform colour
mouth: oral circular disc, with few blunt teeth. migrate to estuaries or the sea, where they parasite other fish. they return to freshwater to spawn, which takes place during the spring and early summer, usually in stony or gravelly stretches of fast flowing water. The adults do not feed in freshwater, and die after spawning.