This SAC overlaps a number of other SACs including parts of the Pembrokeshire Marine SAC and the Pen Llŷn a’r Sarnau SAC, and encompasses the entire Cardigan Bay SAC. 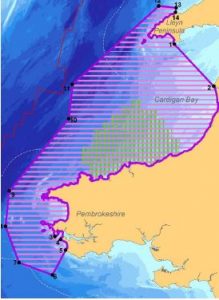 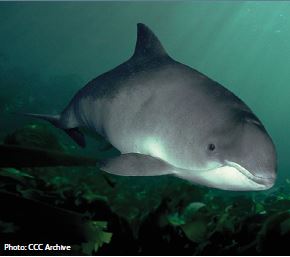 Photographs in column 2 and 3: Janet Baxter 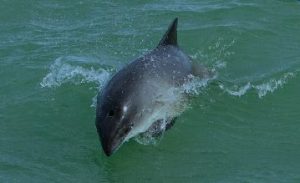 Harbour porpoise are the only member of the porpoise family found in European waters. They are distributed all around the UK coast. Their range reaches across the temperate cool coastal waters of the Northern hemisphere. There are three candidate Special Areas of Conservation (SACs) for harbour porpoise in Wales, the West Wales Marine SAC covers Cardigan Bay.

Appearance
Harbour porpoise are one of the smallest animals in the dolphin and porpoise family, less than half the size of a bottlenose dolphin. They mature at just 1.4 – 1.9 metres long; with females slightly larger than males. Harbour porpoise, unlike their dolphin relatives, have no pronounced forehead and no beak.
They have a small, rounded head, and a mouth that curves upwards as if smiling.

Behaviour
These very special, but elusive small marine mammals can be spotted in relatively shallow water, less than 200 metres deep, especially in tidal races and around headlands. They can dive for as long as six minutes. Their small size, small triangular dorsal fin, and gentle rolling motion as they surface to breathe are key features to look out for.

Harbour porpoise rarely engage in eye catching, exuberant behaviour; and usually do not display the acrobatic leaps, breaches and tail slaps characteristic of the bottlenose dolphin. They usually swim slowly and are often solitary or in small feeding groups. The most common social group is that of a mother and calf. These timid animals usually avoid boats and other watercraft. Their small size means they have to feed constantly to maintain their body temperature in our chilly seas and this makes them vulnerable to prey depletion from over-fishing. They prey mainly on bottom dwelling species of fish, such as sand eels, this puts them at risk of being caught as ‘bycatch’ – getting accidently tangled up in fishing nets. They also feed on shoaling fish such as herring and whiting. Harbour porpoise usually follow seasonal prey movements, moving inshore in the summer and offshore in the winter. 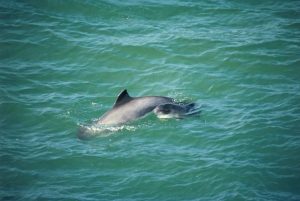 Harbour porpoise are sexually mature at three to five years of age. Females give birth to a small calf every one to two years, usually between May and August. The gestation period is eleven months, and calves are weaned at between eight months and one year old. Their low reproductive rate makes them vulnerable to population decline. Few survive past nine – twelve years of age, although a few animals up to twenty three years of age have been recorded.

The biggest current threat to harbour porpoise throughout their range is ‘bycatch’ – incidental capture in fishing nets resulting in thousands of fatalities each year.
Population declines have also been linked to depleted food resources, possibly from over-fishing. Their elusive nature makes them hard to study; scientists know little about the behaviour of the harbour porpoise and research is largely focused on animals killed as bycatch in fishing nets or from dead strandings. New evidence suggests that the harbour porpoise may be struggling to reproduce successfully because of high level of pollution. Please report your harbour porpoise sightings to the Marine Protected Area officer via the Cardigan Bay SAC website. www.cardiganbaysac.org.uk

If you spot harbour porpoise whilst at sea, maintain a distance of at least 100m and please follow the Ceredigion Marine Code of Conduct.